Born in Durango, Colorado, in 1983 to parents Michael and Janet Kuss, Jeff Kuss was the older of two boys; alongside brother, Eric Kuss. Kussdreamed of being a pilot as a child. Beginning flying lessons before he could drive, Kuss obtained his pilot’s license at the young age of 17. After high school, he attended Fort Lewis College, graduating in 2006 with a degree in Economics. Kuss was commissioned as a Second Lieutenant in the U.S. Marine Corps and reported to Pensacola, Florida for aviation indoctrination in July 2007. He earned his wings of gold in 2009. In January 2011, Kuss was promoted to Captain and went on to graduate from the Navy Fighter Weapons School, also known as TOPGUN, in 2012.

Marine Captain Jeff Kuss was a decorated pilot who, through his career, accumulated more than 1,400 flight hours and 175 carrier landings. Captain Kuss served in Afghanistan and earned the Strike Flight Air Medal and the Navy and Marine Corps Achievement Medal during his time in the military. He joined the U.S. Navy Blue Angels Flight Demonstration Squadron in September 2014, and flew as Opposing Solo for the 2016 team. Captain Kuss’ favorite part of airshows was meeting his youngest fans, as he was once one of those young fans and remembered the impact meeting pilots had on him.

On June 2, 2016, at the age of 32, Marine Captain Jeff Kuss, Blue Angel #6, lost his life in a tragic in-flight accident in the Town of Smyrna, while training for the Great Tennessee Airshow. He is survived by his wife, Christina, children Calvin and Sloane, parents Janet and Michael, and brother Eric.

Captain Jeff “Kooch” Kuss was a fearless leader, a son, a brother, a husband, a father, and a hero. It is with great honor that the Town of Smyrna and its citizens pay tribute to his legacy with the Capt. Jeff Kuss USMC Memorial. 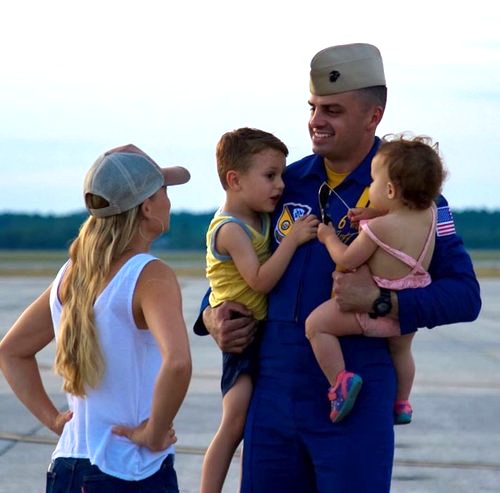 Jeff was my inspiration and the outpouring of support from the people of Tennessee has been profoundly humbling. You all have wrapped our family in so much love. We are inspired and we are grateful. This memorial is a wonderful tribute to Jeff’s life and distinguished service. I am hopeful it will inspire and encourage the children who see it to pursue their dreams as Jeff did. – Christina Kuss